Located on the White Gold property along the Ryan’s Trend, a 6.5 km long by 1 km wide northwest-southeast striking trend of anomalous gold and arsenic in soils which extends from the Ulli’s Ridge target in the south to the Teacher showing in the north. The Ryan’s Surprise and Ulli's Ridge targets are located at the southern part of the Ryan’s Trend, approximately 2km west of the Company’s flagship Golden Saddle and Arc deposits and 11km south of the Company’s VG deposit.

Access to the White Gold property is provided by fixed wing airplane from Dawson City and Whitehorse to Thistle Creek airstrip and by boat from Dawson City to a barge landing on the Yukon River. The Company’s Thistle Camp is located at the southernmost part of the property and is the base of operations for all exploration. A gravel road that is used extensively by placer miners connects the Camp with the airstrip and barge landing, which are located approximately 7.5 km east and 4.5 km northwest respectively of the Camp. Access to the Golden Saddle and Arc deposits to the north is provided by a 21 km long exploration road located 600 m west of Camp. 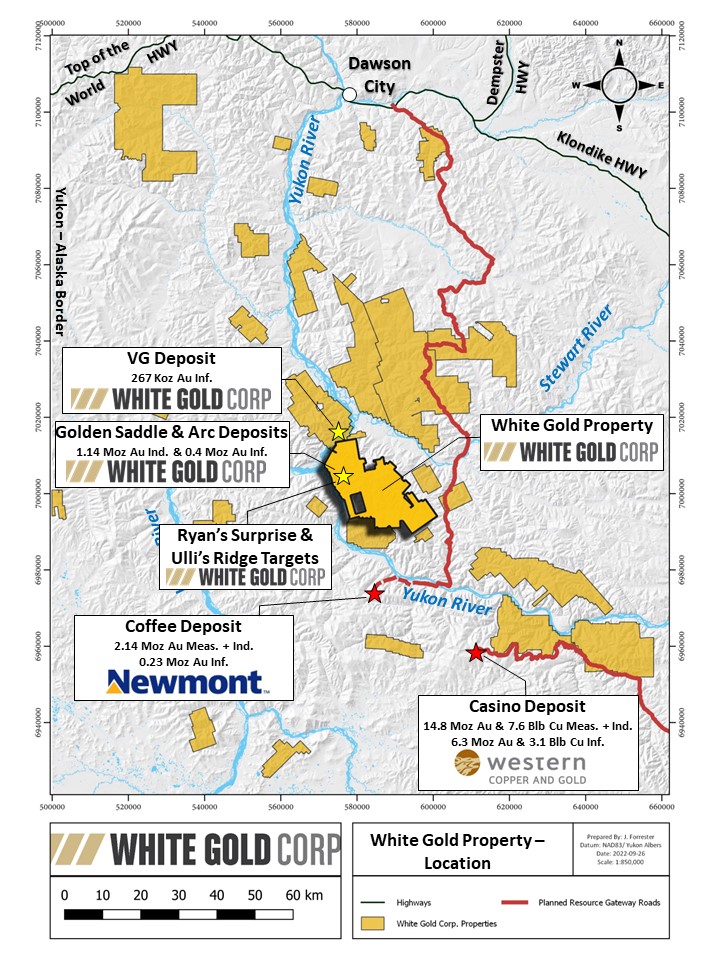 Terry Brace, P.Geo. and Vice President of Exploration for the Company is a “qualified person” as defined under National Instrument 43-101 – Standards of Disclosure of Mineral Projects and has reviewed and approved the content of this project summary.

Geological modeling of both the Ryan’s Surprise and Ulli’s Ridge targets indicates many similarities in terms of style of mineralization and structural controls. The Company feels that excellent opportunities exist to expand these zones and additional drilling between the zones will help determine if they form separate zones, or if they are part of a single larger mineralized system. Similarly, the 6.5 km long Ryan's Trend further to the NNW remains substantially under-explored and continues to represent excellent potential for new discoveries proximal to our flagship Golden Saddle deposit.

Note: All reported widths are those measured along the length of the drill hole. True widths are currently unknown.